Getting the Smart LCD Screen working with Rambo and Marlin

I have been running into issues where I couldn't get my Rambo electronics to work with my Smart LCD screen in Marlin. It worked fine when I had the screen hooked up to Rumba but when I switched over to Rambo, I just had a series of white boxes instead of the normal display: 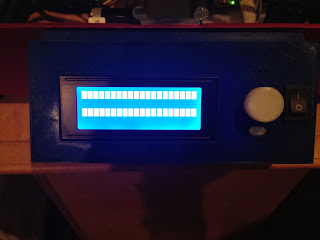 I had some hope when I came across a forum post where they detail how to get the LCD support working with Polygonhell's Repetier firmware but not Marlin, which is what I am more familiar with.


I went with the non functional LCD screen for several months but recently, I came across a nice post by Os1r1s and an alternative build by John Oly that claimed to get the Smart LCD working with Rumba and Marlin. To my dismay it did not initially work until I noticed that Os1r1s specifically mentioned using Arduino version 0023 and not the most current version. I downgraded and replaced the newer pins_arduino.c file here: arduino-0023/hardware/arduino/cores/arduino.

After restarting the Rambo board, the screen worked perfectly! 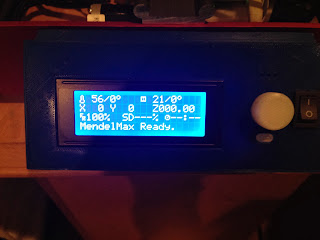 I was able to reproduce the white boxes with taking the exact same firmware and putting it back on the newest version of Arduino so it is clearly an issue with the software. Halopend, on the SeeMeCNC forums solved this problem on the latest version of Arduino by replacing pins_arduino.h with this updated file here:

If you are on a Mac you can get there by right clicking on the Arduino program and clicking "Show Package Contents".

Thanks for the help everyone!
Posted by Coherent at 9:29 PM