I wanted to install an LCD screen on my 3d printer so that I could run it from SD cards without a computer constantly needing to be plugged in. I was inspired a great deal by a panel mount that Ohm Eye developed but I have a reprap discount LCD which will not fit Ohm Eye's configuration. I saw a different case by Wersy where it was designed for the correct LCD/SD card combo I have but it fit on a Prusa Mendel. Through the wonders of 3d modeling I created a mashup that had the best of both worlds. 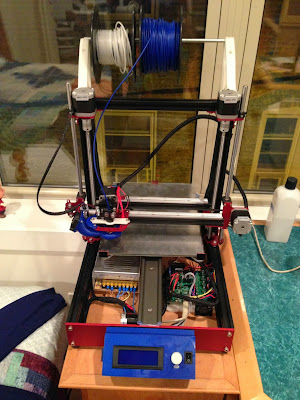 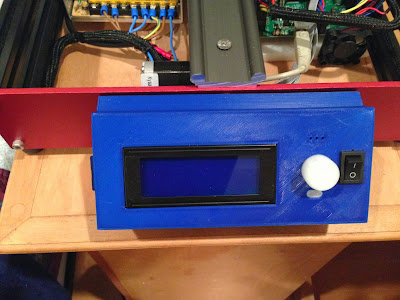 The front has the LCD, a click wheel and a reset button (white oval below wheel). I also added a power switch to easily flip the power to the power supply on and off. The power comes in from the outlet to a fuse at the back of the printer. The 120 V then hooks up to the switch like this: 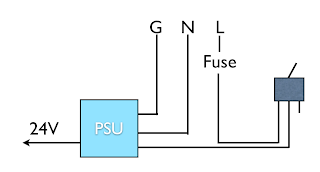 I bought the switch from Pololu.

On the side, I put a slot for the SD card. 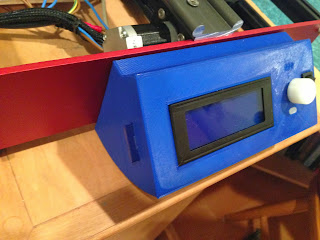 The front of the mendel max has 4 holes so I wanted an accompanying 4 holes in the panel mount as well. Unfortunately, since the model is printed layer by layer with that front face on the bed, this created a problem since the panel curves at an angle. 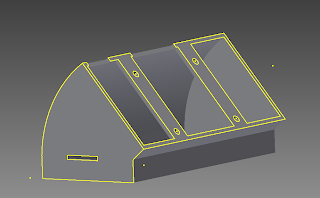 See what I mean? Since it will be printing the upper hole supports last, unless the stripes went all the way up, there would not be a way to support the upper tabs (without the support feature turned on in slic3r). This works great except that with the supports going across there isn't a good way to get the LCD in! To solve this problem, I inserted the LCD while it was printing. I waited until  the print had finished 60% and just dropped it in. 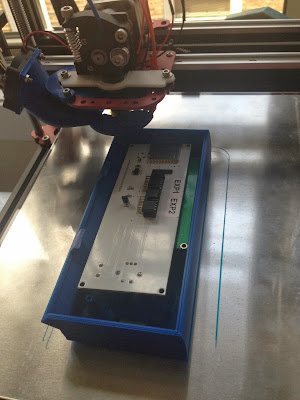 I was lucky because had I mis-engineered the box and needed to print a new one, this wouldn't be the easy to remove without breaking the box. A messed up box wouldn't do me any good anyways so it probably would have been okay to break at that point if I had issues.

Configuring the firmware
I have been primarily using Marlin as my firmware so after installing the LCD I set the following settings and booted it up:

Unfortunately, it appears as if there is an incompatibility with the combination of RAMBO, reprap discount smart controller and Marlin because my screen just displayed a series of white boxes: 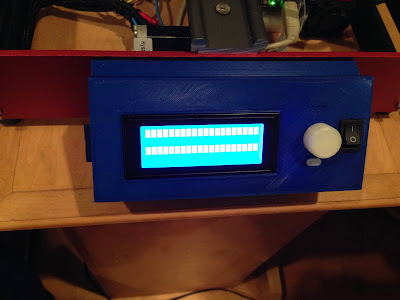 I at first thought it was a bad solder point or cable installation. Installing a specially modified version of Repetier that was set up by folks over in the Rostock Max forums corrected the issue. I think the click wheel works and that it is just the screen itself but there are enough differences between Marlin and Repetier that I can't figure out what to copy and paste yet. I am still stumped by this problem so let me know if you have any suggestions!

Download the files at my Github or thingiverse.
Posted by Coherent at 5:52 AM