I know that I have been slow about updating this blog but I ran into several issues with printing that I have just recently been able to solve. I'll detail the problem here and my solution and hopefully it can help someone else.

Problem 1: Randomly crashing X axis
I was getting really bizarre motions where after starting a print that was going well, the X axis would just randomly start moving in much bigger motions than it should. For example, I notice that when printing a circle that instead of printing a 0.5 inch circle suddenly it will start printing a 6" circle. This frequently happened when I would start a print and so when it tries to find the center of the bed it will go off the +X axis and start grinding on the gears.

Solution 1: Unshielded LCD cables were causing a problem
This seemed like an electronics issue so I replaced my USB cable and switched to printing from a SD card and it did not solve the problem. I was running a new RUMBA board so it was hard to find any support for this issue even in general much less for this specific board. I eventually found that removing the reprapdiscount LCD screen seemed to fix the issue. It is likely that it was interference with the unshielded cables even though mine were <30 cm.

Problem 2: Extruder randomly extruding 4x as much plastic
I thought that I was out of the woods with the X axis problem but then I ran into a new issue that I didn't have before. I would turn my printer on and start a print which would go fine. Often I'd want to tune a slic3r setting so I would stop the print and restart it several times. I noticed that sometimes my extruder would put out way more plastic than it should. At first I thought it was different slic3r settings but after doing some controls where I took the same gcode and printed it several times I discovered that the printer would just apparently squirt out different amounts of plastic with the same gcode. Here is an example where you can see one parameter on the left when it is thick and one parameter on the right which is what it should be doing. 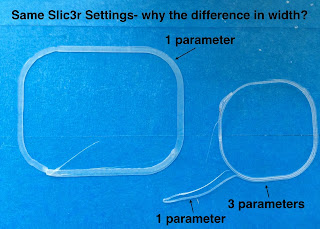 This made me think that it was a steps/mm setting that was getting reset but I noticed that after unplugging the board for an hour or so that I could get the settings to reset and behave normally. This led me to believe that it was a flaw in my Rumba electronics themselves.

I paid more attention to the extruder motion which gave me a clue. Here is the normal extruder extrusion rate:
After printing for a while I can do the same experiment and see that the extruder is moving 4x the speed as before:

This evidence makes it seems like there is some sort of switch such as on the microsteppers that is defective and is randomly switching between microstepping and normal stepping during the print. The hitch with that hypothesis is that I get the same behavior when I hook up the extruder to a different stepper on the board which has different switches.

Solution: Purchase non defective RAMBO Electronics
After reburning the bootloader to no avail, and getting no where with reprapdiscount to actually replace the board, I gave up and purchased a set of RAMBO electronics instead. I wanted a way to directly test whether it was the RUMBA board or some other firmware issue that I couldn't think of. Boy was I impressed when I hooked it up.

After printing a test cube that came out beautifully, check out my second print with the RAMBO electronics, the curve fan holder, with all the stock settings: 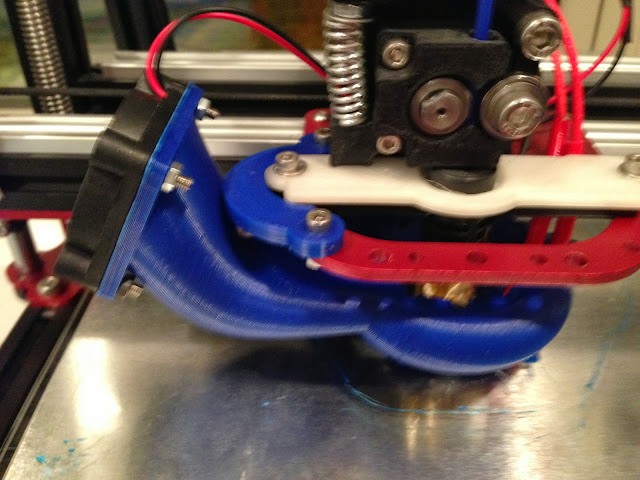 There was not a layer or boundary out of place on this print. I am just so impressed with the quality of the Mendel Max Setup now that I have the electronics working properly!