Welcome to my rep rap blog! I hope to document my adventures building my second 3d printer. I have previously built a self sourced a prusa mendel 1.0. Although I eventually was able to get it printing smoothly, it took a ~6 months to iron out the bugs. Here is it printing some parts on a good day:


Here are some of the chief complaints that I was hoping to avoid the second time around:

1) The triangular design of the Prusa Mendel enables it to be very strong but unfortunately the direction that the X axis moves is exactly the direction that the printer is weakest. This prohibits faster print speeds because the frame itself has a tendency to flex.
2) I would like the possibility of printing with multiple extruders which further necessitates having a very stiff frame in the X axis as well as having enough room to fit both extruders.
3) My previous extruder was a maker gear hot end and a wades geared extruder. Although it was great when it worked, there were many times that the hobbled bolt would lose its grip or the hot end would be otherwise unreliable. The ceramic heat core is also very fragile so I am looking toward a more robust resistor or heater cartridge solution. I am looking for an extruder solution that is bulletproof in its reliability.
4) The Prusa frame is not very open and can be finicky to get everything squared up correctly. The threaded design has a tendency to come undone from vibrations loosening the nuts holding everything together.
5) I am not a huge fan of hanging the X axis from the Z lead screws because they have a tendency to  pull out from the printed Z couplers. This leads to the whole X axis falling down.
6) Leveling the print bed was always a huge pain on the Prusa version 1. The design called for a plate with the lm8uu bearings and then a second plate that you actually print on that is attached to the first plate through 4 screws and springs. Although the springs are a nice buffer in case you crash your hot end, they also prohibit precise positioning of the height of the print bed so this inevitably leads to more crashes. Newer designs tend to have a fixed print bed that you level one and forget about so that is a definite must for my new printer. Also, leveling with 4 screws makes it over constrained- 3 is much better.
7) I am not a fan of 8mm rods because they flex and after using lm8uu linear bearings with the rods for about a year, the bearing actually cut trenches in the rods. Going forward I want to stick with 10mm rods and possibly migrate to a motion system where i won't have to worry about damage to these expensive rods over time. Stainless steel should be a good choice here but buying precision ground rods from Mitsumi goes for upwards of $100 for all the axis.
8) I have a preference for 24 V over 12 V so that the bed will heat up faster and the motors will have more torque. My previous heated bed was made from 120 V silicone heaters attached to a 1mm aluminum plate. This heated up quite fast and the aluminum plate helped distribute the heat evenly.

With those properties in mind I had several printers that I was considering:
1) Prusa i3
Pros: The aluminum plate makes the x axis super rigid
Cons: Aluminum plate must be custom made unless you buy it from Europe
2) Lulzbot TK-0 (now TAZ)
Pros: Huge 300x300mm2 print bed, Aluminum extrusions
3) Ord Bot Hadron
Pros- Kit for $500 or so, linear rails make for a smooth ride
Cons- Very little support for it in the reprap community. Some people are building in buildlog.net
4) Mendel Max 1.5
Pros- Very rigid
Cons- Same triangular frame as prusa mendel
5) Mendel Max 2.0
Pros- Orthogonal frame design, All aluminum
Cons- Expensive

Coincidentally the Midwestern Reprap Festival was going to happen around the time that I was making this decision so I was able to see these printers in action. Here are my thoughts on the different types:

1) Prusa i3- Josef Prusa was there demoing his machine and although his prints were silky smooth, the printer sure vibrated like crazy while it was working! There were some people with SGraber's laser cut version of this printer that have additional stabilization pieces which seemed to help with the vibrations but I was really looking for something that was more professional in appearance. In addition, the fixed size of the x axis meant that it would be more challenging to fit a second extruder without drafting a wider frame. Finding a water jet cutter to make an aluminum version of this frame is not cheap and would run over $100 for sure.

2) Lulzbot TK-0 is a very nice printer but since it has a print bed of 300x300 mm2, the thing was just enormous and would easily take up a whole desk. They were however printing out pretty large objects with no trouble at all. Their layer heights were small and the parts looked amazing.

3) The ord bot is made out of makerslide but the connections between the rails is not great so the printer was not very sturdy. Also, the main guy selling the printer was more interested in selling bulk quantities of his motors so he gave off the feeling that the printer was just a side deal and not his real concern. Even though this kit was $400 for the mechanical stage, there wasn't really a community behind it so it seems like you would be on your own.

I was pleasantly surprised by the performance of the Roostock style printers but they are quite tall! When on a table it is about eye level and I am 6'3"! Given that I live in an apartment this probably is a little too big for my purposes but as Richrap has shown, you can print some pretty impressively large vases with it:
http://richrap.blogspot.com/2013/04/rostock-delta-3d-printer-build.html

At the end of the day I was most struck by the Mendel Max 2.0. Maxbot's, the designer, was extremely knowledgable about all aspects of the design and it was obvious that he really did his homework in selecting each piece of the printer. The 90 degree frame made it very open and easy to get in there and the aluminum extrusions made the whole printer rock solid and it didn't flex at all. The printer uses a combination of 10 mm linear rails, and these troughs with plastic cars that slide in them.

It took about a month to arrive but here is the hardware kit unassembled: 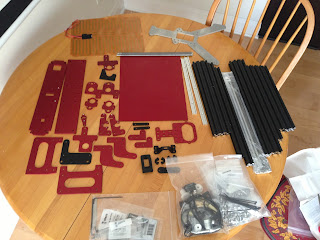 I was going to document each stage of the build, but since it went together pretty smoothly and Maker Tool Works already made a great instruction manual with plenty of pictures it seemed a bit excessive. I had previously purchased Rumba electronics from the Indiegogo campaign so I was sort of stuck getting the Mendel Max 2 hardware kit and then I purchased the motors from ultimachine, and a 24 V power supply from amazon.com. Here it is mostly assembled: 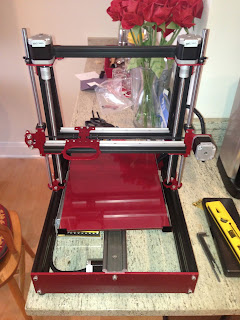 Despite it going together well here are a few stumbling blocks I had:


Using custom RUMBA electronics had several other issues:
Here is a video of it moving!